I never liked laptops. The screen is too small, they heat up, you can’t upgrade them easily or at all, and they tend to lag a lot more easily than desktops.

I admit that I never invested in an expensive laptop because I always preferred desktops, and I’m also constantly struggling financially 😃. Probably, the high-end laptops might work smoothly, as expected.

But, today, I did find out that I’ve been wrongfully cursing my laptops for lagging all the time, preventing me to do even the basic stuff on them. Well, it’s their fault a bit, too, because I never had issues like this on desktops.

What Issues I Had Before Switching to Ubuntu

When I first bought a laptop, it was a basic Lenovo with:

I said that it would be enough for browsing and watching Netflix. And it is.

But every time I turned it on, my CPU and Disk were at 100% usage for a ton of time. Of course, I cursed the laptop.

I didn’t spend time investigating the issue. I just sold it, then bought an Asus with:

Basically, the processor is the only notable improvement.

So, I ended up not using it much because it pissed me off. I also got a Smart TV, so I didn’t need it for Netflix anymore.

But I still thought of figuring out the problem because two different laptops can’t be that bad that you can’t even do basic things on them.

And It wasn’t hard to figure out the problem. Looking at the Task Manager, in Windows 10, I saw that the Disk was at 100% every time Windows or an app was handling updates. Being an HDD, not SSD, didn’t help either.

The main culprits were Windows and my antivirus, Bitdefender. Whenever I turned on the laptop, they would start handling updates, and until they finished, I could barely open files.

The longer it stayed turned off, the longer I had to wait after turning it on. I even waited 20 minutes one time.

And it also lagged here and there afterward, when Windows was still doing don’t know what, because there’s always something nasty working in the background, searching for updates and stuff like that.

Now, is it entirely their fault? No. I always used Windows 10 and a bunch of apps that perform updates frequently, such as Bitdefender, but I never had problems with the CPU or Disk on desktops, no matter the build.

I think the problem is with laptops on Windows 10, mainly low-cost laptops, even though the second laptop’s configuration is decent for basic stuff.

Making the Switch to Ubuntu from Windows 10

How did it go?

Well, I’m excited and happy to let you know that I’m writing this blog post from my laptop - I never did it before - while listening to music on Spotify and having several tabs open in Chrome.

I was worried about my low memory, but it worked smoothly and never lagged once! On Windows 10, I’d be cussing like a sailor right now.

Let me share with you some first impressions after using Ubuntu for several hours.

Ubuntu is not harder to install than Windows 10. Their tutorial helps a lot. Basically, you have to:

That’s pretty much it. You don’t have to use the Command Line to write code or something like that.

It can get more complicated if you want to create partitions. It’s not as straightforward as on Windows 10. You’ll need to do some research for that. I did but didn’t quite get it, especially since most information is pretty outdated. I just went with the standard installation.

It doesn’t lag, not even on updates

After I finished installing Ubuntu, it had to make some extra software updates. I also updated the drivers for the graphics card.

Unlike Windows 10, it didn’t lag at all while performing the updates. Ubuntu was doing the updates, and I was minding my business, going through files, and using the browser.

On Windows 10, everything would have frozen.

Oh, and I didn’t need to restart Ubuntu after the updates. 😃

I expected to have trouble navigating through it and doing basic stuff, but until now, I didn’t have any problems.

Of course, I had to do some searches on Google, such as how to remove and add icons as Favorites in the Dock (left sidebar), and stuff like that. But for the most part, it has a very intuitive design.

It feels like Android a bit. Maybe that’s why it seems familiar. Here are some similarities:

I didn’t have a problem with drivers

I was afraid that something won’t work because there are no Asus drivers for Ubuntu. But everything works fine: the sound, wi-fi, graphics.

When you install Ubuntu, it lets you choose if you want it to install 3rd party drivers for graphics and wi-fi hardware. I went with that.

After installing it, I went to the Software & Updates app and installed the latest proprietary driver for Nvidia. 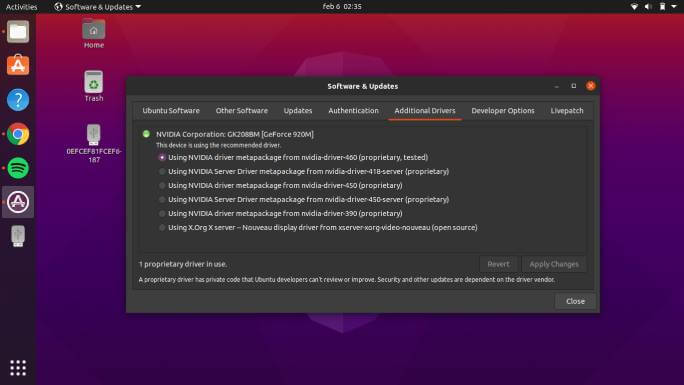 It automatically recognized my graphics card and found the drivers for it. Before this, it used drivers from the X.Org X server, which is open-source. I don’t know what that is, but I think that’s what it does when you check the box to have 3rd party drivers installed when installing Ubuntu.

I can’t use some apps… obviously

Even though there are plenty of known apps developed for Ubuntu, you won’t find them all. This is expected when you use other operating systems than Windows and macOS.

For example, I can’t use Photoshop or Affinity Photo. At least not without 100 workarounds and extra apps. I don’t even want to think about that.

I think that I couldn’t use it anyway with my current laptop’s hardware.

I know there are some good alternatives available for Ubuntu, such as Krita or Gimp.

Luckily, for this post that I write on my laptop, I used Photopea - very similar to Photoshop - because I only need to downscale the images, without adding arrows, shadows, and so on. You could do that with Photopea, too, but meh, I prefer using Photoshop for that.

Some well-known apps that are available for Ubuntu are Slack, Discord, Spotify, and more. Unfortunately, some mention that they either don’t actively support the app or that the developers are mostly contributors from the community, not their own.

Note: Spotify for Linux is a labor of love from our engineers that wanted to listen to Spotify on their Linux development machines. They work on it in their spare time and it is currently not a platform that we actively support. The experience may differ from our other Spotify Desktop clients, such as Windows and Mac.

This makes me think that the apps might experience issues often if they’re not focusing on them as much. Spotify works fine now.

These are my first impressions of Ubuntu. And, in conclusion, I love it so far, mainly because it works smoothly and I can actually use my laptop for something, other than collecting dust.

I don’t miss Windows 10 one bit, and I’m going to keep using Ubuntu on this laptop and others that might follow.

I’ll still use Windows 10 on my desktops because I depend on it. Also, I don’t have problems with it on desktops, so I don’t hate it. It works fine there for years.

Next, I have to figure out how to set up things for web development on Ubuntu. Theoretically, since it’s based on Linux, it should be easier, and more things should work out of the box, unlike Windows 10, where you have to set up stuff like Git Bash, Vagrant, Virtual Box, etc.