I was happy when I woke up today because I was going to work on my new project. But that changed because a review came in on Fiverr from that special type of client.

I have a couple of quick gigs on Fiverr.

So, now, instead of working, I’m ranting.

Recently, I started getting more orders from buyers that don’t contact me first, even though it’s the first thing I mention on the gigs’ description, with bold and yellow background!

I know, I know… Most people don’t have the patience for anything nowadays, including reading a small gig description which is vital for what they’re about to spend their money and time on.

Buyers that don’t contact me first, immediately raise a red flag for me and freak me out. 90% of the time, they’re trouble.

It most likely means that they went cowboy and didn’t read anything except for the gig’s title.

Once upon a time…

The pattern started a few weeks ago when someone bought my gig without - you guessed - contacting me first.

Fortunately, it was fine, and I delivered the gig quickly. The buyer marked the order as completed, without asking for revisions, and left positive feedback but a 4-star rating!

How can one be satisfied with someone’s work, say it was a “Great choice” and then slam a 4-star rating on 3 different levels?

We didn’t even communicate! He ordered (directly) > I delivered > he accepted the work without complaints.

So, how can one leave a 4-star rating for Communication With Seller if there was no communication?

How can you rate poorly something that didn’t even happen/exist?

He assumed that if we would’ve communicated, it wouldn’t have been so good?

I can’t wrap my head around it. It makes my nose bleed thinking about it.

I also contacted the buyer to see if it’s a mistake, which has happened before, but nope.

The buyer thought that a “Great choice” deserves a 4-star rating on 3 different levels. 😄

This was my first non-5-star rating, and it dropped my gig’s rating to 4.9. Thanks!

At least I can block buyers, which I did. It made me feel better.

But wait! It gets much better!

This was the one that triggered me enough to write this rant.

A few days ago, I got another order, without prior contact, of course.

Oh, it was a treat, especially because the buyer wrote in Portuguese! 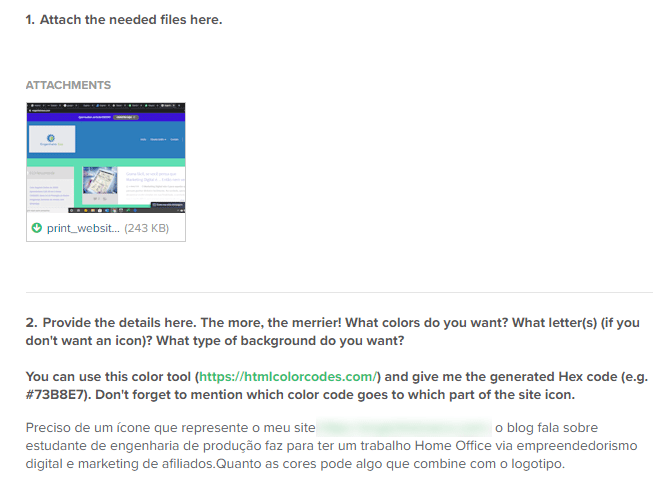 I just love people who start writing in their language like you’re supposed to know it. Except for English, which is the universal language.

Anyway, I used Google Translate and I got this (I replaced the link):

I need an icon that represents my site example.com, the blog talks about production engineering student does to have a Home Office job via digital entrepreneurship and affiliate marketing. As the colors can something that matches with the logo.

Obviously, the buyer didn’t read/understand the description and didn’t provide the required files. He only attached a screenshot of his website.

Luckily, the site’s address was provided, and I was able to download the logo file and work with that.

I delivered the work, the buyer marked it as complete without asking for revisions, then left positive feedback but a 3.7 rating!

The feedback was in Portuguese, of course, and it translates with Google Translate to:

Another customer who’s happy in the feedback and annoyed in the ratings.

How does that even work?

It’s like a teacher praising a student for doing a great job on their test, then puts a D grade on it.

And again, as the previous buyer I pointed out above, a 4-star rating for Communication With Seller, when there was none!

I don’t think there could have been one either, since I doubt that the buyer knows English at all.

One more damn reason to contact the seller first to see if you can understand each other enough to work together!

And a 3-star rating for Service as Described?

Assuming he did read the description:

It doesn’t make any sense.

Anyway, this dropped my rating further, to 4.5, which, of course, led to the downgrade of my Level One status.

Could you imagine how devastated I would be if my income would depend on those Fiverr gigs, as most sellers depend on?

Two clients who don’t know ‘how to human’ on a buyer-biased platform! That’s all it takes to ruin your hard work, income, and well-being!

Obviously, I blocked the buyer and also reported him for being a menace. Nothing will happen, but it made me feel twice as good.

What Does This Have to Do with Fiverr’s Sucky Order Review System?

Well, after some time, Fiverr thought that it was fair not to let sellers see the buyers’ review until after they leave a review themselves.

It might sound good in theory, but in practice, it sucks! And it affects sellers most, of course.

Sellers leave good reviews because they have to

Unless something went horribly wrong, most sellers won’t leave a bad review, especially when they don’t know the buyer’s review.

Do you think a client will return if you leave them a 3-star rating and feedback like:

“The client didn’t contact me first! He can’t read or something. Thank you! Come again!”.

So, sellers are forced indirectly to leave positive reviews if they want clients to come back and make money.

Hell, even I left positive feedback and ratings to those two, and I make peanuts on Fiverr. It’s not my full-time job there, I don’t really care.

I left positive feedback because: 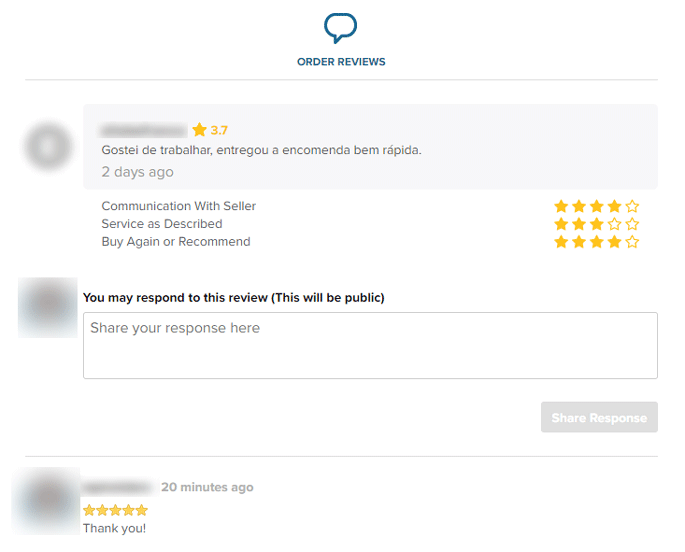 Look at me, thanking and leaving a 5-star rating to someone who messes up sellers’ ratings because they can’t think rationally.

More fair would have been for me to see the buyer’s rating, as it was back in the day. That way, I can leave a review for someone like that based on the whole picture.

As in, the buyer didn’t even bother to read the description, asked for stuff in Portuguese, and also left me a bad rating that doesn’t even reflect the feedback? Not to mention reality…

Ok. Then, I won’t be Mr. Nice Guy, and I’ll tell my side of the story as it happened, so other sellers can be aware.

But that’s if I can afford to lose a client, because they won’t come back after a bad review, of course. Most sellers can’t afford that.

Now, because I expected them to leave a review that reflects reality, I didn’t want to be a dick, so I left a good one for both of them.

So, now they got away with “murder”! They’re going to kill other sellers’ ratings.

In the past, you could contact the buyer to find out why they left a bad review, especially in irrational cases like the ones I mentioned above: no complaints, positive feedback with a low rating.

You could also provide them with further revisions to improve the end product until they were happy enough to change the review.

Basically, you could’ve worked things out so everyone can be happy.

But now, it’s against Fiverr’s rules to contact buyers about the reviews. They have to ask you first, like that’s going to happen.

They also made it difficult for buyers to change the review. They have to contact support. 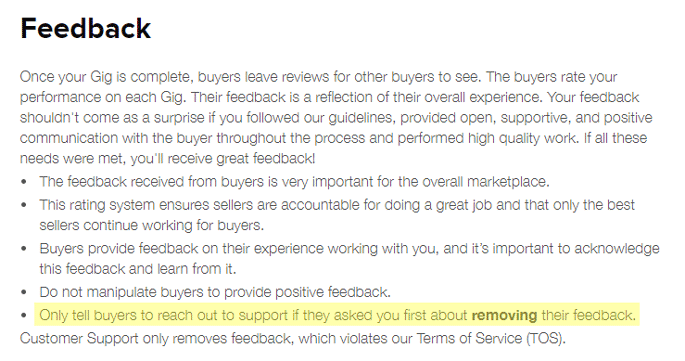 So, even if they somehow feel some kind of remorse and want to change the unfair review, they’ll probably change their mind once they find out that they have to contact support and write the details about the situation.

If a buyer doesn’t have the patience to read a small gig description, you can rest assured that they won’t contact support to do you a favor.

This sucks even more when someone leaves you a bad rating by mistake, which has happened to me in the past.

I asked the buyer if the rating was a mistake, since she was very happy with the result and also left positive feedback.

She said that it was, she apologized and changed the review.

But back then it was easy. Buyers could change reviews themselves, or you could send them a request to change it, if I remember correctly.

Will I start leaving “fair” reviews from now on?

Probably not 😃 , because most clients won’t read the description, won’t contact you first, and so on. That’s just how it is and will be. Working with people is not easy.

But, most of the time, everything works out fine in the end.

So, if everything works out fine in the end and the client is nice, I’m willing to overlook their mistakes and leave a good review.

Just so I can wake up with an “Amazing job!” feedback with a 3-star rating attached to it for no rational reason!

So, that’s why the current order review system is broken. Because, unlike buyers, one way or another, most sellers will always tend to leave good reviews if they can’t see the whole picture.